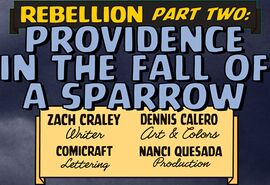 As the plane goes down, a maskierte Person is sucked out through the hole and hurtles through the air. The sheer velocity of the fall rips the seat and straps apart, revealing the fugitive to be Sparrow Redhouse. She manages to use her ability to bring the dirt below rushing up to meet her, which cushions the fall and saves her life. Later, Sparrow steals clothes from the same caravan that Matt, Hiro, Mohinder, Peter and Ando were previously hiding. Changing in the bushes, she is approached by Micah, who has tracked the plane wreckage down using his ability and is looking for Monica, Nana and Damon. They are attacked by agents and Sparrow uses her power to fight them off. Sparrow and Micah turn to go when they are approached by Flint, who wants to help the agents in order to spare himself. However, the agents refuse to work with targets and one shoots at Flint, blowing his head off. Sparrow and Micah use Flint's death as a diversion to escape and eventually go their seperate ways. Sparrow promises Micah that they'll find his family while Micah decides to unite the evolved humans to take on Heimatschutzbehörde. His first step involves contacting Claire.