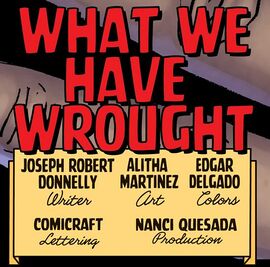 Mohinder looks at his scaleless hands and contemplates that all his nightmares are over. Next to him, Tracy Strauss, who is driving the car that the two are riding in, asks Mohinder if he can recreate the catalyzed Formel. When Mohinder asks why he would do that, Tracy retorts that it is not important and the real question is if he can. Mohinder says that without a sample to isolate the catalyst, all he can do is create monsters like himself. When Tracy asks him what if he had a sample to work with, Mohinder asks where the sample would come from. Tracy lifts her skirt to reveal a vial of the formula, and says that this vial is probably the last in existence. She also points out that despite their faults, Arthur and Nathan were right: giving Fähigkeiten to everyone in the world is the only way to save it. Tracy asks Mohinder to consider being a "Held", and further tries to lure him into the plan, saying that Mohinder will be recognized as the greatest man on earth. As Mohinder is about to give in, he snatches the formula from Tracy's hands and bails out of the car. He makes his way off the freeway and looks at the vial of the formula, asking himself if this is what he really wants before stomping on it, destroying it. As he walks back towards New York City, he thinks to himself that he is finally free.

In this graphic novel Tracy is driving a Corvette, but when she picks Mohinder up in the last episode of Volume 3, shes driving a Nissan 350z.