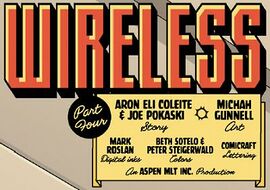 Trapped, Hana offers her CIA connection as a means of escaping through diplomacy. She is brought to the U.S. Embassy, where she learns Mr. Bennet lied to her about his organization. Hana uses the technology of the building to flee. She turns on the sprinklers, steals a gun, and holds an Embassy employee hostage, concluding in a spectacular escape. Hana finds refuge in the quiet, remote Missoula, Montana, where she searches for information about the man who lied to her.