The Kanji dictionary defines yo as "bestow; participate in; give; award; impart; provide; cause; gift; godsend" and sai as "genius; years old" leading to a broader definition of the symbol under Ando's explanation, possibly as "bestowing talent/genius" or "providing/imparting ability". 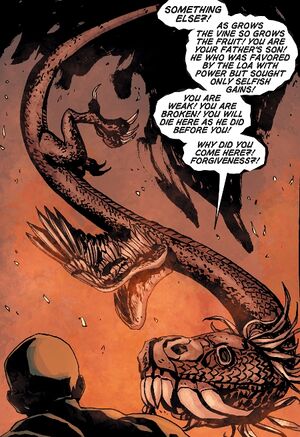 The Serpent and the Crane

While sketching the symbol in the sand, Guillame tells his son the story of the serpent and the crane. The serpent was a creature of ambition, tired of crawling on its belly and eating grubs and mice. One day, he spotted the crane. The crane was carefree and stupid, but could fly. The sun shone on her always; she slept in the clouds and drank from the rainbows. The serpent found the crane at her watering hole, swallowed her whole, and was able to fly using her wings. The serpent flew around the sun and to the moon; he ate the clouds and played in the rain. However, Guillame notes, "What good is it to fly, if you have nowhere to go?" He says that the serpent lost touch with the ground. Guillame then scratches through his sketch. (It Takes a Village, Part 3)

In March, 2007, the adult Haitian returns to the crossroads where his father died. He summons the Loa and imagines he saw a serpent with wings, from whom the Haitian asks a blessing.