Hayden Panettiere is the American film and television actress who portrays Claire Bennet.

Born in 1989, Hayden has been acting since she was eleven months old, and made her television debut before she was five. She is best known for her roles in Remember the Titans, A Bug's Life as the voice of "Dot", and Racing Stripes. In addition to numerous film and television roles, she has recorded a pop album, scheduled for a release on 8 May 2007. Her voice can be heard singing the song "I Still Believe" on the direct-to-video Cinderella III: A Twist in Time. She also sings the song "I Fly" from Ice Princess, and wrote the song "My Hero is You" for the television show Tiger Cruise. Hayden does the voice acting for the character of Kairi in the popular Square Enix games Kingdom Hearts and Kingdom Hearts 2.

Hayden has appeared with Heroes co-stars Tina Lifford (in Joe Somebody), Sakina Jaffrey (in Raising Helen), Graham Beckel (in Ally McBeal), and Alex Fernandez and Matt Lanter (in Commander in Chief, with visual effects by Mark Kolpack). 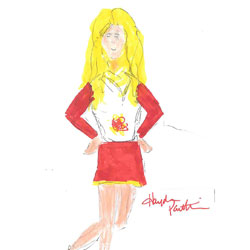 Hayden Panettiere drew this picture of her character in order to raise money for the Pediatric Epilepsy Project.
Abgerufen von „https://de.heroeswiki.ddns.net/index.php?title=Hayden_Panettiere&oldid=12768“
Kategorien: