A Global News Interactive video reports that after being left for dead in the middle of a forest, and after his mother was captured and sent to Auschwitz in 1944, David Rooijker was smuggled into Spain. David's father left him on the steps of a monastery where he stayed for about a year. When no one came to claim the boy, he was shipped overseas to the Vasquezes' home in Argentina at the war's end. 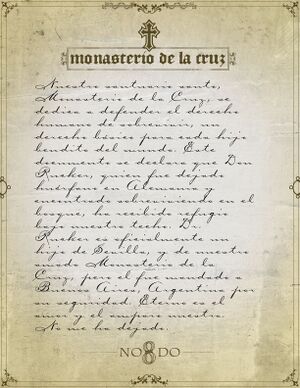 
Our holy sanctuary, the Monastery of the Cross, is dedicated to defending the human right to survive. a basic right of every blessed son of the world. This document declares that Don Rucker, who was left orphaned in Germany and found surviving in the forest, has received refuge under our roof. Dr. Rucker is officially a son of Seville, and of our beloved Monastery of the Cross, but he was sent to Buenos Aires, Argentina for his safety. Eternal is the love and protection from us. He has not left me.