David Sullivan was a soldier in the United States Marine Corps recruited by Pinehearst as part of their super soldier program.

David trains with the other recruits at Pinehearst Hauptquartier in Fort Lee.

Twelve hours before Angela Petrelli's interrogation of Rachel Mills, David is with Rachel and Ryan Hanover at Pinehearst Hauptquartier. He comes to Rachel's defense when Ryan says that girls shouldn't be in the military. Shortly thereafter, a nearby explosion causes the building to start collapsing and David is pinned underneath a large beam. David tells Rachel he does not know where Ryan went and they try to move the beam together, but cannot do so. He next watches as Rachel walks to the other side of the room and shouts out to warn her when an air duct begins to collapse on top of her. Ryan then witnesses Rachel teleport back in front of him and asks what happened. She responds "It was nothing."

Rachel Mills helps David tend to his wound and get to his feet when the two see Ryan Hanover holding two doses of the formula. Rachel quickly steals one from him and injects David, before being shot in the shoulder by Ryan. David falls to the ground and begins to manifest his synthetic ability.

Angela asks Rachel why she killed David if she promised to help him escape the Pinehearst lab. Rachel recounts that David had keeled over and growled after she injected him with the Formel. Ryan Hanover fires a shot towards David. Still growling, David takes off super fast with his ability and hides nearby. David then mangles Ryan as he prepares to shoot Rachel. Then, he attacks Rachel aggressively, but Rachel teleports out of the way. After going for a second attack, Rachel impales him with scissors, killing him.

According to his character reference at NBC.com, David grew up on military bases all around the United States. His only desire being a career in the service, David has served on three tours of duty, and has been awarded a silver star and a purple heart. Before being deployed back to Iraq, David was recruited into Pinehearst. 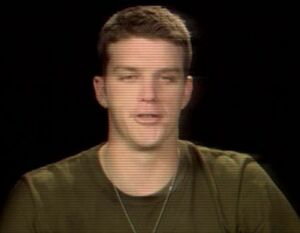 In chapter 5 of Operation Bad Blood in the iStory, the Pinehearst contracted player sees a technician watching a video feed of the recruits talking. The technician explains that he is screening outgoing mail from their new recruits for security breaches. David's message to his father is viewable by clicking the "video feeds" link on the page:

Hey, Dad! So, uh, are we up for another tour? Not Afghanistan, it's a new program; something special. I'll call you soon.

David was injected with a genetic modification formula while at Pinehearst. His ability manifested almost immediately, frightening Rachel Mills and Ryan Hanover. David's eyes glowed red-orange, and he seemed to move very quickly. David also seemed to be very aggressive. In fact, his aggressive attack on Rachel prompted her to defend herself, ultimately killing David.