Mohinder Suresh contacts an FBI agent to help find the people named on the the list.

Mohinder Suresh's attempts to contact the FBI finally pay off, and an FBI agent comes to visit him at his apartment in New York, NY. The two talk about Chandra's list of people with special genetic markers, and that a number of people on the list have been turning up dead or missing. The agent notes that Mohinder would be a suspect if he didn't have documentation showing he was in India at the time.

Mohinder says that he's been trying to locate the people on the list and warn them about Sylar. The agent responds that they did find information on one of the other names on the list: Sarah Ellis. Mohinder says he tried to find her but was unsuccessful, but the agent asks if he's sure and hands Mohinder a mug shot. 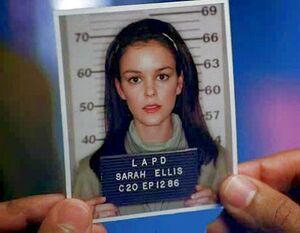 Eden has a police record in Los Angeles, CA

The woman in the mug shot is the woman he knows as Eden McCain. Mohinder says he knows Eden and she lives across the hall, but he hasn't seen her for a few weeks. The agent tells Mohinder that Eden's body turned up three days ago in Lake Ramsey, Canada, with a gunshot wound to the head, a suspected suicide.

For other uses of FBI, see FBI (Begriffsklärung).