Sendhil Ramamurthy is the American film and television actor who plays Mohinder Suresh.

Sendhil's family comes from India, and his ethnicity plays an important part in his life, and in his acting career. He has made appearances in many television shows, including Grey's Anatomy and Numb3rs.

Sendhil has appeared alongside Jayma Mays in Blind Dating. 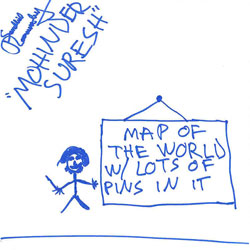 Sendhil Ramamurthy drew this picture of his character in order to raise money for the Pediatric Epilepsy Project.