Syn Anders is a 16-year-old girl who has the ability of empathic manipulation.

Syn's childhood was considered normal. Named after her grandmother, Cynthia Griffiths, she grew up in a happy home with good values, love and respect. Syn is an only child and often spent a lot of time alone in her room, especially during the cold winters. It can take a toll on a person's psyche.

Generally a happy child, nothing seemed out of the ordinary. In fact, she was almost too good. A mind like a sponge, she sailed through middle school into high school. Honors and advanced college preparation courses consumed her life. No time for boys. She feels she is too smart for the world and wants to prove it. 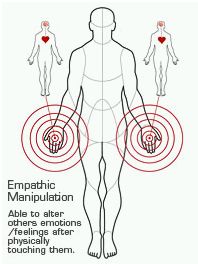 Until now, she has only really used her ability to amuse herself in those long winters. An extra smile here to stay up a little later or a few more tears there to get some sympathy. However, so far she cannot use her ability on herself.

According to her assignment tracker file at primatechpaper.com, Syn's control index is 45%. Her data analysis shows her biological level is at 80, cerebral at 65, elemental at 10, and temporal/spatial at 35.