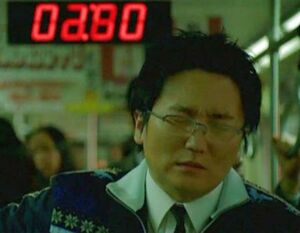 Hiro travels through time while riding a Tokyo subway train.

In Heroes, Hiro Nakamura & Peter Petrelli have the ability to travel forwards and backwards in time, and has (to some degree) the ability to alter historical events. However, Hiro's power still obeys some underlying rules.

In 1905, Albert Einstein proposed a theory that unified mass, energy, motion through space, the relativity of time, and formed a new mathematical concept called spacetime. All objects in the universe move through spacial dimensions while time passes, but the rate at which time passes is relative to the velocity that you are traveling. We humans experience three dimensions on a daily basis (our frame of reference), and within our frame of reference, time "flows" at a rate of 1 second per second. Observers from a different frame of reference will see our frame moving faster or slower than theirs, but they will still measure time in their frame at 1 second per second.

Some physicists have hypothesized that the reason time "flows" is because of a property of matter called entropy defined in the Second Law of Thermodynamics. Entropy is the measurement of how energy will disperse in a given system, such that energy will always move from a higher state to a lower equilibrium state. It is proposed that the entire universe is "unwinding" from its initial high energy state (the "Big Bang") creating the dimension of "time" as the universe expands.

However, we humans do not perceive time flowing in both directions. For us, the arrow of time points "forward". We have a memory of where we have been, but no perception of what we are going to do; we can only perceive the probability of events that will occur as derived from our current conditions.

In the direction of forward flowing time, an action (cause) will have a predictable outcome (effect) according to the laws of physics, where the cause always precedes effect.

If alteration of a sequence of events (via time travel) were to occur where an effect no longer had a cause, the situation would result in a paradoxon. Perhaps the most common thought experiment is the grandfather paradox, where a time traveler goes back in time and inadvertently causes the death of his own grandfather (effect) before his father's birth. If his father were never born, then the traveler himself would never be born, and thus he could never go back in time, and thus never cause the death of his grandparent. If the grandfather is not dead, then he has a child, who has a child who becomes the time traveler, and the cycle loops.

The results of encountering a paradox are unknown. Science fiction writers envision temporal paradoxes having catastrophic effects, ranging from violent explosions to "winking out of existence".

It is assumed that if time-travel were possible in the future, then statistically someone is traveling into their past (our present) with the intent to change it, yet somehow, paradoxes are not being observed (in the present). The Principle of Self-Consistency states that the probability of events that result in a paradox is zero.

This essentially states that logical paradoxes that result from time traveling are self-correcting, such that a time traveler cannot alter history in such a way that would be inconsistent with the reasons for time traveling in the first place. Either the traveler is prevented from making their intended change to the past through an unexpected sequence of events, or any change made to the past was always meant to happen and is incorporated in the history of the time traveler.

The self-consistency principle is often controversial due to the implications that the time traveler has no free will while traveling in the past, yet does have free will when in the present and future.

In a universe with a single timeline, all events that occur at every point in history (past, present and future) must not only be self-consistent, but immutable. A time traveler moving in the past is simply acting out a role; they cannot change anything that would alter the chain of events that eventually lead to their decision to go back in time. Every action that occurs was predestined to occur.

The Multiple Universe theory allows that every probable outcome of any event spawns a new universe with its own timeline, and that a time traveler simply moves up and down the timelines, taking different branches along the way. A time traveler moves from the present back in time to undo a great injustice. They succeed and return to the present, however, are they really returning to "their" present?

Contrary to the Fixed Time Theory, the Multiverser theory states that the universe's timeline acts more like a record head on a VCR; jumping forward in time allows all events in the universe to play out as if the traveler were not there, and jumping backwards "overwrites" any events that occurred in between. The theory allows for free will in every timeline, and multiple timeline rewrites are allowed to occur, but all events in every timeline adjustment must be causally self-consistent or a "time loop" will occur.